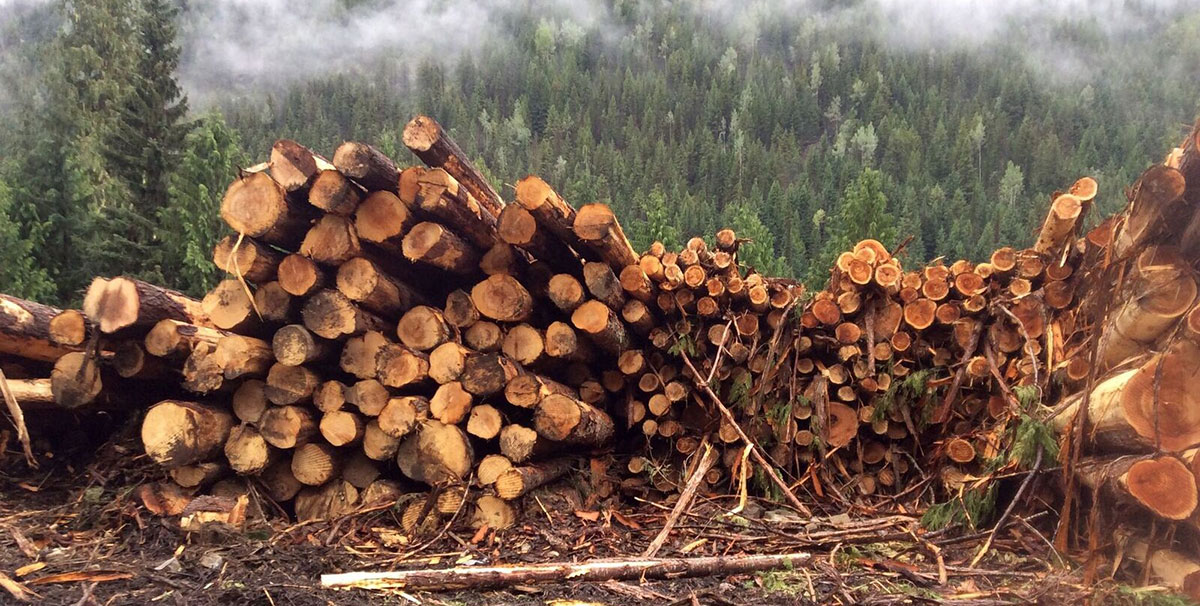 Our temperate interior rain forest contains highly diverse ecosystems. Tree species within collectively are often referred to as the

Harvest planning on the complex and rugged landscape requires thoughtful and respectful stewardship balancing biodiversity, cultural values and economics within the laws and regulations of the tenure.

The KDCFS area based license lies within the Kootenay Lake Timber Supply Area. Its boundaries delineate a gross area of 32,416 hectares (ha), of which roughly 19 percent are mountain tops and alpine tundra and 81 percent are forested. Roughly 10,681 ha of the forested land are considered the “working forest”. Elevations range from 640m at Kootenay Lake to 2300m in the alpine. Climbing from Kootenay Lake to the alpine, a hiker will traverse three Biogeoclimatic zones within a steep topography formed by glaciation. The process left stepped slopes dissected by steep stream channels scoured to bedrock. Wells Terrain Report

The zones delineate elevation bands with markedly different climate, affecting vegetation, soils and nutrient cycling and are named for their characteristic old growth tree species: the Interior western Cedar – western Hemlock zone (ICH) extends from the lakeshore to mid-slope elevation and transitions into the Engleman Spruce – Subalpine Fir (ESSF) zone, which extends up to the Alpine Tundra above.

The license operates under a Forest Stewardship Plan (FSP), an operational level plan with landscape level objectives. It defines strategies to conserve and protect timber and other natural resource values while undertaking forest activities. The FSP contains requirements for the notification of the public, First Nations, and government agencies where primary forest

activities will be taking place and provides a process to identify areas of concerns prior to field work. It also states the results, strategies or measures that the forest licensee will achieve in order to be compliant with government objectives for forest values. Eleven forest values identified by government are: soil, timber, wildlife, fish, water, biodiversity, cultural heritage resources, resource features, recreation resources, visual quality, forage and associated plant communities.

are of CP41 on Cooper Face

Hemlock prices have softened during the winter, which rendered the timber sale we had permitted on Cooper Face uneconomical for harvest this year. We will develop and permit several small blocks in the same area by May 2019 and have an agreement with Sunshine Logging from Kaslo in place to harvest  roughly 14,500 m3 of conventional wood during the summer months.  We are also working on a cable permit in the Nashton area behind the Kaslo landfill as a 2020 fall-back option or a future opportunity for 2021. Both cutting permits have been delayed into the fall, as we found occupied nests of birds of prey (Accipitridae) in both locations.

The discovery of Douglas-fir beetle on the Wardner hillside just outside of Village limits has heightened our concerns about the increasing number of dead and dying trees in this location, which was so far a root rot caused decline. We are looking for low impact options to reduce the wildfire hazard on these slopes as soon as possible, since the landscape is highly visible from Kaslo and is also a favourite recreation destination.